Aim: To determine if the type of grab action can be differentiated by analysis of the grab mark impression.

The visualisation of grab mark impressions has been previously studied (ref 1) and it was found that VMD was superior (over cyanoacrylate fuming) at visualising this type of latent mark. The potential benefits of visualising grab mark impressions include identifying areas to extract for DNA analysis (from latent residues), the corroboration of witness statements and provision of intelligence regarding chain of events.

With regards to determining chain of events, the ability to differentiate between the type of grab action that occurred would provide valuable intel on whether an individual has been violently grabbed or lightly touched by another individual.

A single donor deposited 4 different types of “grab” action onto samples of 85% cotton 15% polyester fabric measuring 25 x 25 cm. The samples were left for 24 hours in ambient laboratory conditions, away from direct sunlight.

A West Technology Forensics VMD360 was used to process the samples. For each VMD run, a single sample was mounted to the exhibit holder and positioned at the top of the VMD chamber. A control fingermark was also deposited onto a piece of white copy paper and placed next to the fabric sample. Two lengths of silver wire (99.99%, 0.5 mm dia.), measuring 6 mm each, were placed into the left-hand evaporation crucible. A single pellet of zinc was placed into the right-hand evaporation crucible. The chamber was evacuated to better than 2.0 x 10-4, which took approximately 15 minutes.

All of the fabric samples readily developed using the silver/zinc process. The deposits from each action were visualised for all samples tested. The images included in this section have not been enhanced to ensure that the level of contrast and detail observed is representative of the action performed.

The results of the study show that it was easy to differentiate between a grab (closed hand) and a flat handed push by studying the developed VMD impressions. The outline shape of the impression changes depending on the type of action performed. 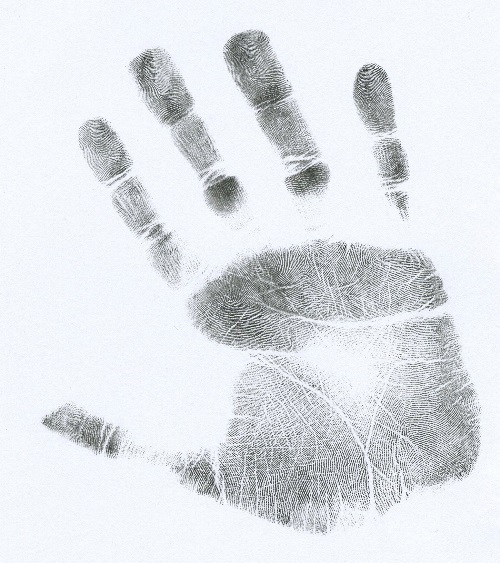 When compared to an inked flat-handed print (figure 1) the grabbing action, as indicated in figures 2, 3 and 4, resulted in the thumb impression being at a larger angle from the palm (blue arrows), and the forefinger impression curving away from the thumb (red arrow), regardless of the force being used (firm vs. light). 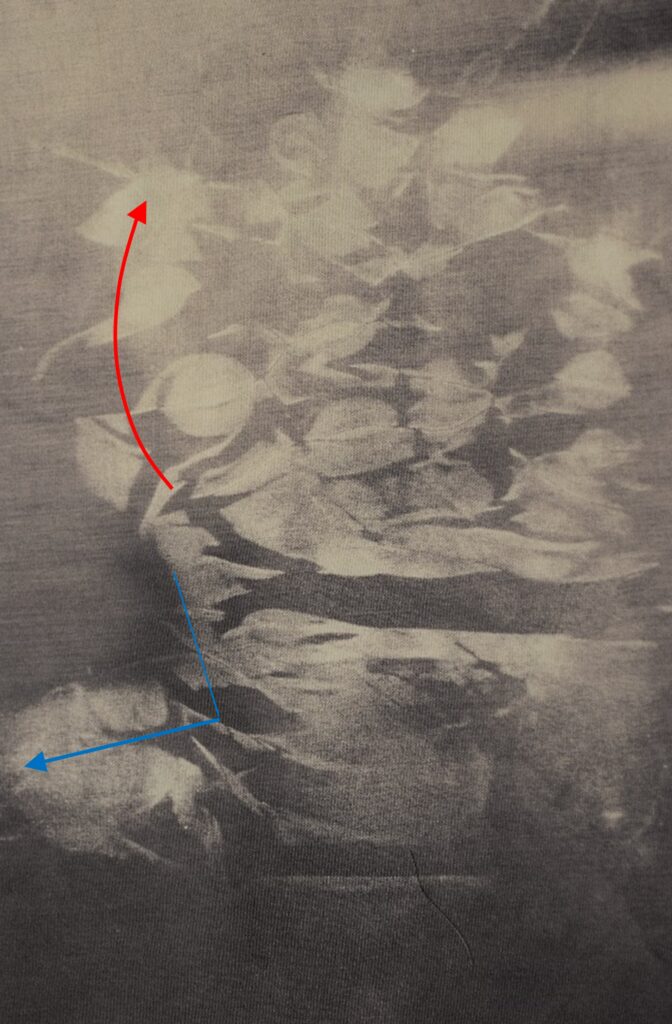 The grab and twist action (figure 2) gave rise to the highest levels of distortion, when compared to an inked hand print. Although the shape of a hand can still be distinguished, the finger digits are less defined and the mark has numerous creases and voids. 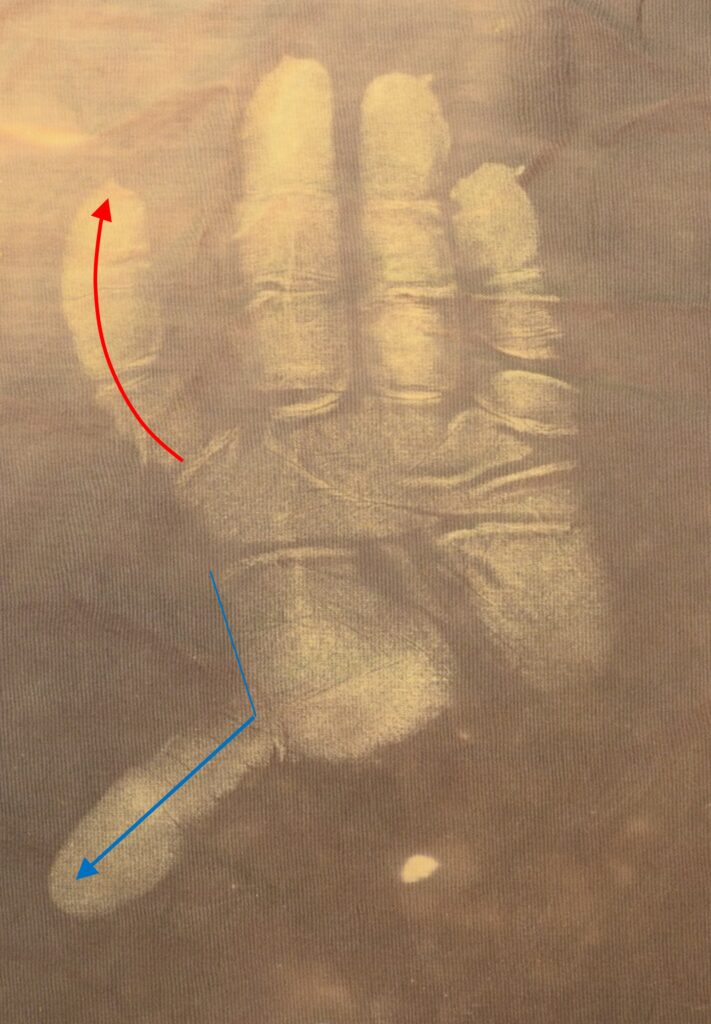 Figure 3 is an image of developed Sample 2. The firm grab and hold gave rise to an obvious hand mark impression; the fingers, thumb and palm can be easily distinguished and have good contrast, with various crease details from the fingers and palm being visualised in the developed mark (not to be confused with voids in VMD development due to creasing of the fabric from the grabbing action). 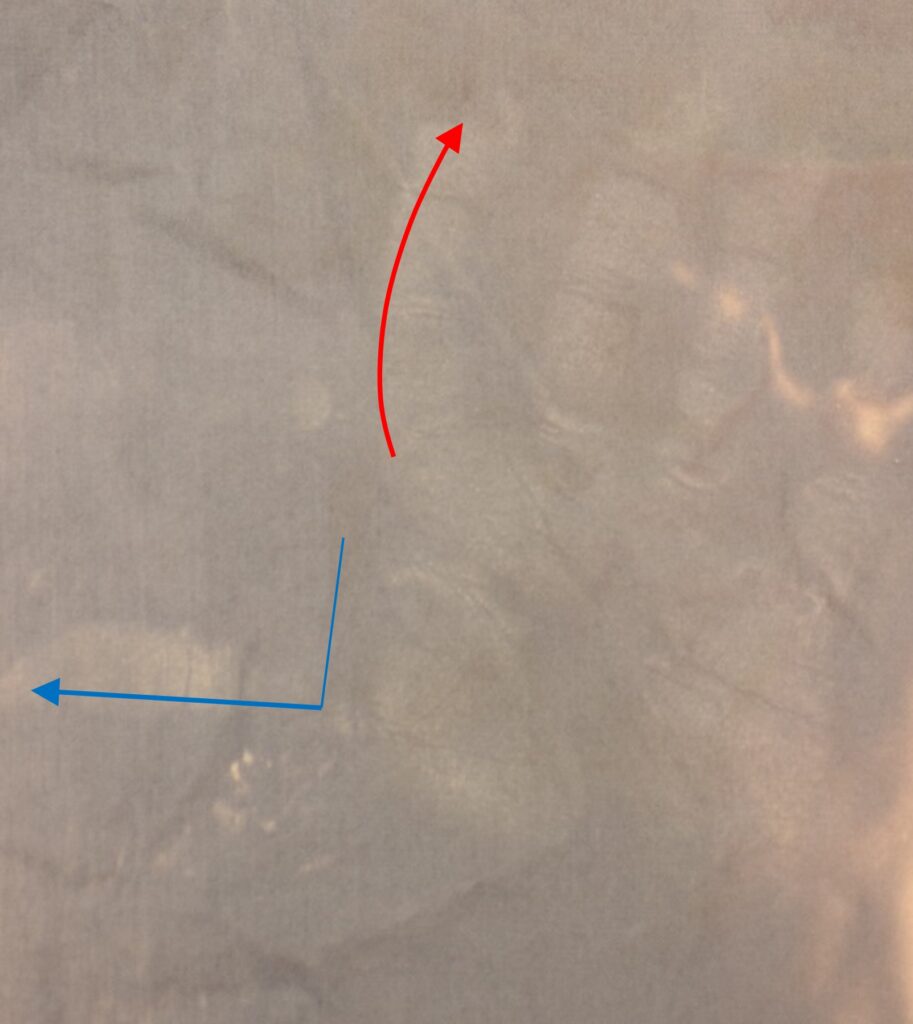 Similarly to Sample 2, the light grab mark developed on Sample 3 (figure 4) also shows various crease details from the fingers and palm, in finer detail that Samples 1 and 2. This is likely to be due to the lighter force used to deposit the impression, which would have caused less distortion of the fabric and therefore a more “intact” mark. There is less contrast in the development of the light grab mark, compared to the firm forces used for the other actions. Presumably the lack of contrast is due to less sweat residue being deposited when a sample is touched lightly versus a firm force being used. 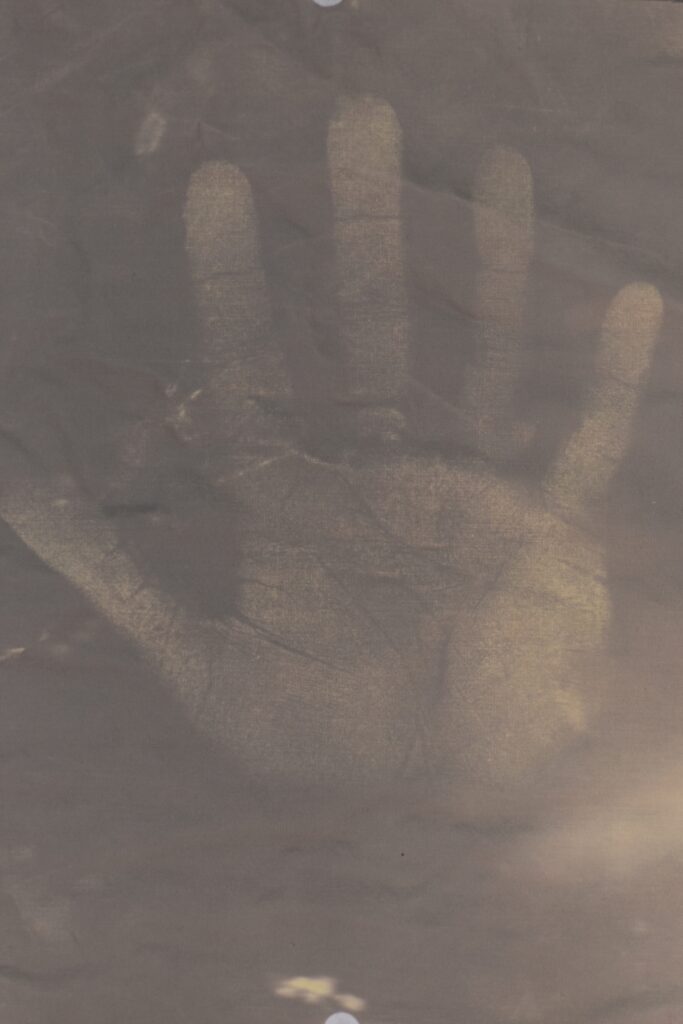 The push action for Sample 4 resulted in a flat, full hand mark with minimal distortion, shown in figure 5. This impression is similar to the flat-handed hand print shown in figure 1. The contrast of development is less than that of the firm grab marks in Samples 1 and 2. This could be due to the force being spread across the whole hand, as opposed to concentrated in the finger tips (as with the grabbing action). Additionally, fingermark ridge detail was also observed. 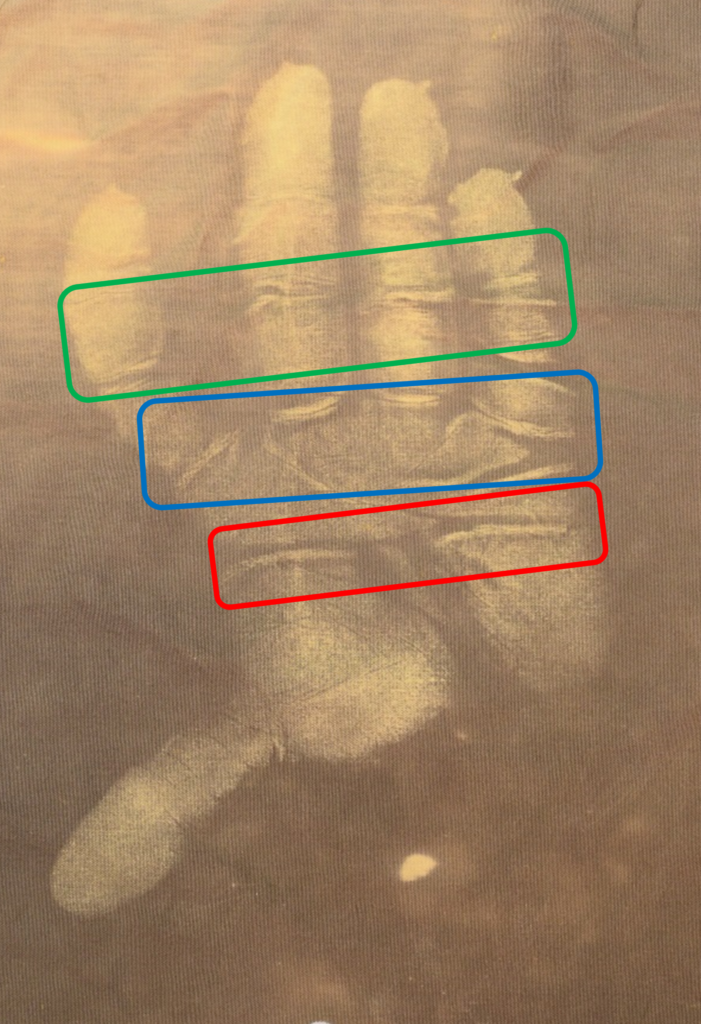 As the force of the grab action decreased the presence of the digital, palmar and thenar creases becomes less apparent, as seen when comparing Sample 2 (a firm grab mark) and Sample 3 (a light, “non-violent” grab mark) in figure 6.

This research gives an interesting insight into the alternative uses of VMD for criminal investigation.

Although this was a limited study the results show that the action of grabbing and twisting, grabbing and pushing can be differentiated by visualising the residue mark left on a fabric surface. A violent grab and twist, of a forceful nature, could be easily distinguished from that of a friendlier light grab. Further work is required to corroborate this work and to establish if the force of a developed impression can be determined, based on characteristics such as the type of development (e.g. contrast) and quality of detail (e.g. definition of ridges/creases).

Ref .1 Fraser, J. et al. -(2014) A comparison of the use of vacuum metal deposition versus cyanoacrylate fuming for visualisation of fingermarks and grab impressions on fabrics – Science and Justice 54  133–140