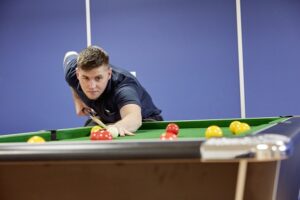 We christened our new pool table by staging a knockout tournament. Most of the staff entered, even those who had never (allegedly!) played before!

There were many hotly contested matches before Will and Adam played the best of 3 frame final in front of a packed, slightly partisan crowd (well it was Production vs Service!).

The final was tightly contested with fortunes ebbing and flowing before Adam potted the final black ball to emerge as the victor.