I started at West Technology nearly two months ago and I feel that I’ve learnt so much already about the vacuum industry. During my interview, I remember stumbling over the ‘tell us what you know about vacuum‘ question. So I have decided to create regular ‘how it works’ posts to share with others what I’ve learnt. First off, I will be getting to grips with helium leak testing and I promise I’ll keep it light (helium dad joke)!

What is a leak?

In its simplest terms, a leak refers to a hole/gap in a surface where a liquid or gas can escape. Some leaks, water for instance, can be harmless but others can be toxic and harmful to humans. When a leak is present, the liquid or gas will move from a high pressure (within a wall or container) to a lower pressure (via the hole or gap). The pressure of a leak is measured by a leakage rate. Leakage rate is determined by the volume and pressure during the measurement period over time of measurement. In other words:

Before getting tied up in scientific semantics, lets have a look at pressure within a bicycle tire. The tire would have a volume of air which is measured in litres. The pressure within the tire would be dependant on how inflated it was. Based on the volume and pressure of the tire we can measure how much pressure should be lost within a certain amount of time (measurement time). Carrying out a leak test can determine how much pressure is actually lost in the tire.

Leak tests are carried out mainly in industrial settings and can be used on products such as; air conditioning units in cars and circulation systems in refrigerators. One way of leak testing is by using a helium leak detector.

Did you know: Due to Helium being so light, the earth’s gravity is too weak to keep it in the atmosphere.

As a result, Helium will keep rising through our atmosphere until it reaches space. 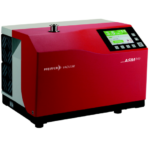 Helium is part of the noble gas family which means that is perfect for leak testing. It is the second lightest molecule which means that it can’t displace air. As helium is lighter than air it is safer to use for leak testing. It doesn’t harm the environment and is safe around humans and animals. Helium can’t be confused with other gases and isn’t flammable or produce a chemical reaction.